Lake Como, as you know was amazing. Part one covered the beautiful scenery and landscape of the region but that wasn’t all this amazing place had to offer.

Let’s talk about food and fashion! (but mainly food)

I’d never been to Italy before so my goal was to go to Italy and eat, eat like I’d never eaten before, go crazy with it, order everything and finish it all.

I am happy to say that I reached that objective. We were staying in a beautiful area called Lecco.

This sounded crazy to me. The restaurant ran out of white wine or they wanted to try beer as an experiment, I don’t know but I was happy to try it out. I had beer as an alternative to white wine but it was phenomenal. It worked! As a fan of beer, I didn’t have a problem with the substitution. I had this large plate of risotto as a STARTER. I did not play any games. 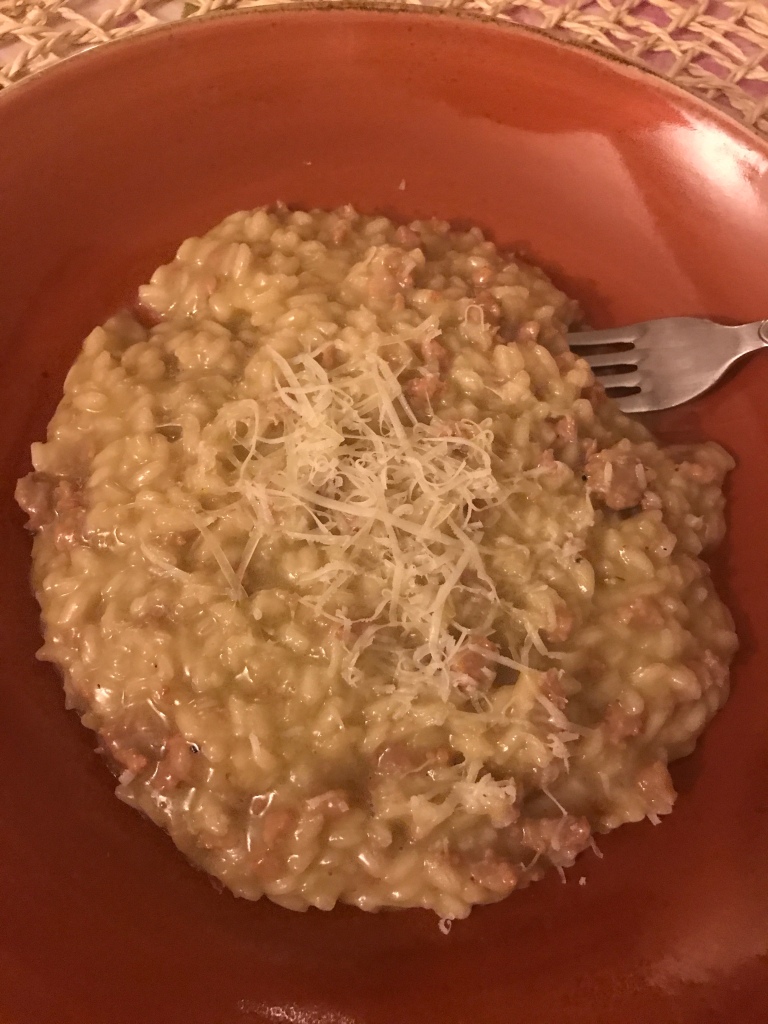 This risotto was fresh and unlike any risotto I’d tasted elsewhere. I love living in the UK and it’s well known that we try to replicate meals from other countries as best as we can, which is a form of flattery but is also so so far from the real thing. I could taste the difference and it was glorious.

This was one hell of a steak. I believe it was sirloin (sorry I can’t remember but if you’re a steak connoisseur, you will probably know the cut by looking at the picture so please feel free to correct me). It was a massive cut of meat. That I ate as my main dish following my risotto starter. 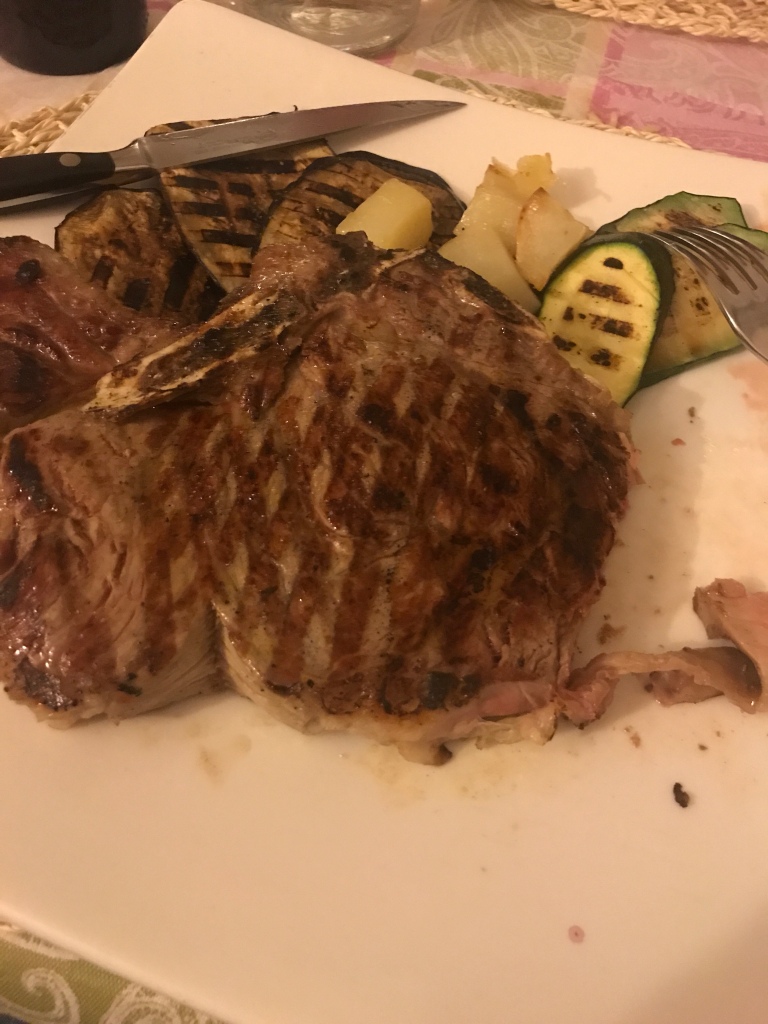 I successfully finished my steak, to the waiters surprise. He seemed befuddled! He looked at me with genuine confusion. I’m aware that I was being extremely excessive but I can eat a lot of food. I wasn’t surprised that I finished everything but everyone around me was. It’s funny.

I also had dessert here because why not. Can’t remember what it was called but it was raspberry something! It was awesome. 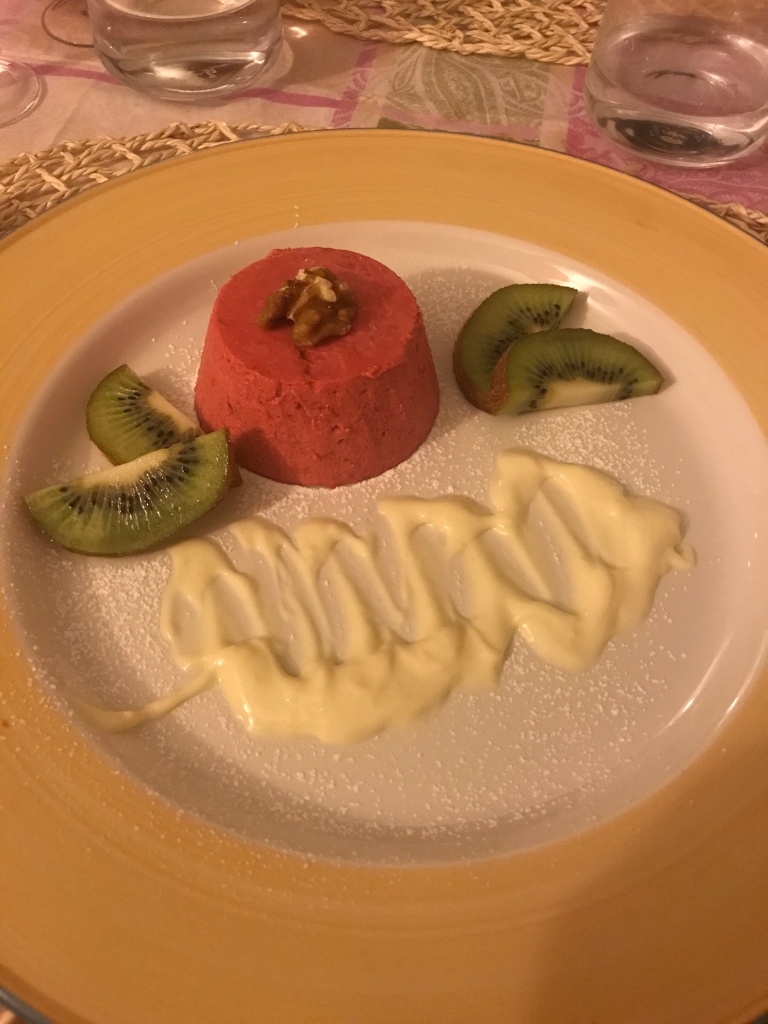 I too, finished that dessert and it was glorious.

I will never complain about big portions especially if the food is good. I seasoned the steak a little but who cares right?

Price: £120 in euros for two people (that included x2 bottles of wine)

Italians do not mess around when it comes to their wine. This supermarket had some of the largest selections of wine I had ever seen. Look at the size of the bottles on the bottom shelf. It’s safe to say you’re spoilt for choice which is how I like it. 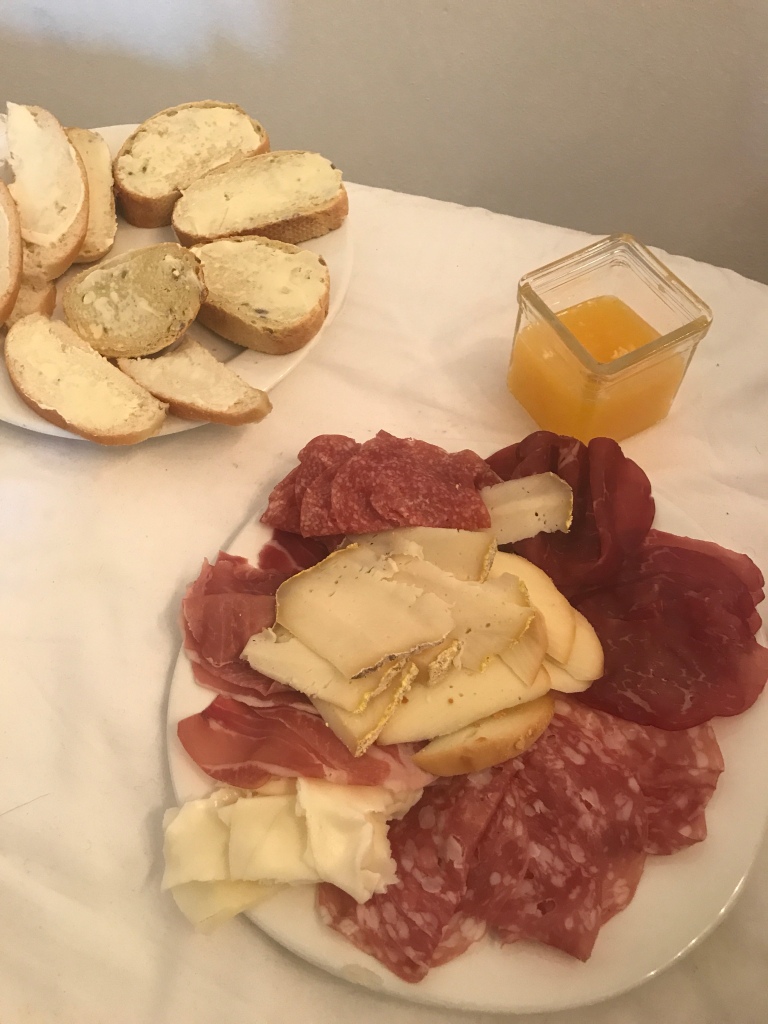 There was also a large selection of cheese, bread and cured meats. I’m not into cold food but this was being made for me so I folded and it was actually delicious. There were a lot of leftovers. Woj bought dessert which was sweet as a gesture but the dessert was gross. It’s the thought that counts though. 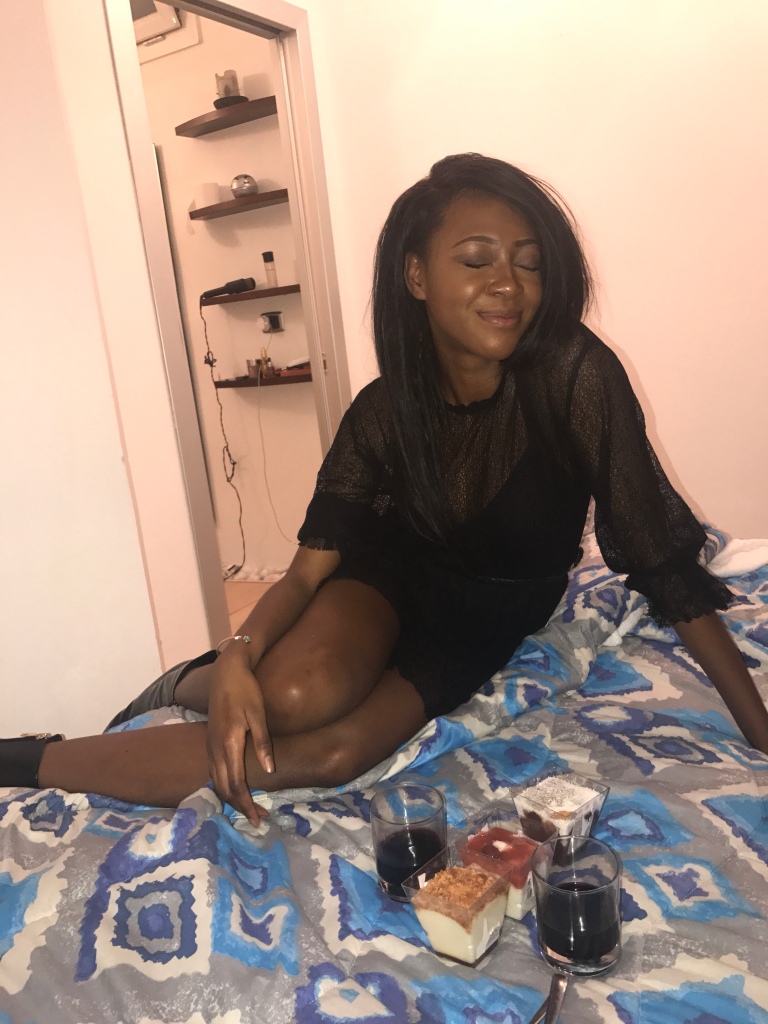 The dessert was this awkward granola topped yoghurt type of thing but actually the yoghurt had more of a thick jelly like consistency. It was confusing and gross and as you can see there were three of them. Disappointing.

At this point it was day two in Lecco. This particular province had a lot of seafood so I wanted to try as much of it as possible. The restaurant we decided to visit was five minutes away from our flat and it was packed, with good reason.

I don’t think I’d eaten for the whole day so I was shaking because I was so hungry which is never a good thing. I literally ordered 60% of the menu.

Starter: Lobster and Pasta (not sure what kind of pasta it was)

Yes this was my starter! A whole lobster! I can’t remember whether it was on the menu as a starter but I got it anyway and it was 11€. Now we all know full well that this meal would have cost over £30 in England so I was in culinary paradise! It was absolutely delicious, I don’t know what was in it and I didn’t care, it was so good.

Wojtek got mussels and fresh pasta which filled him up but I forced him to get more food because I wanted to try more on the menu. 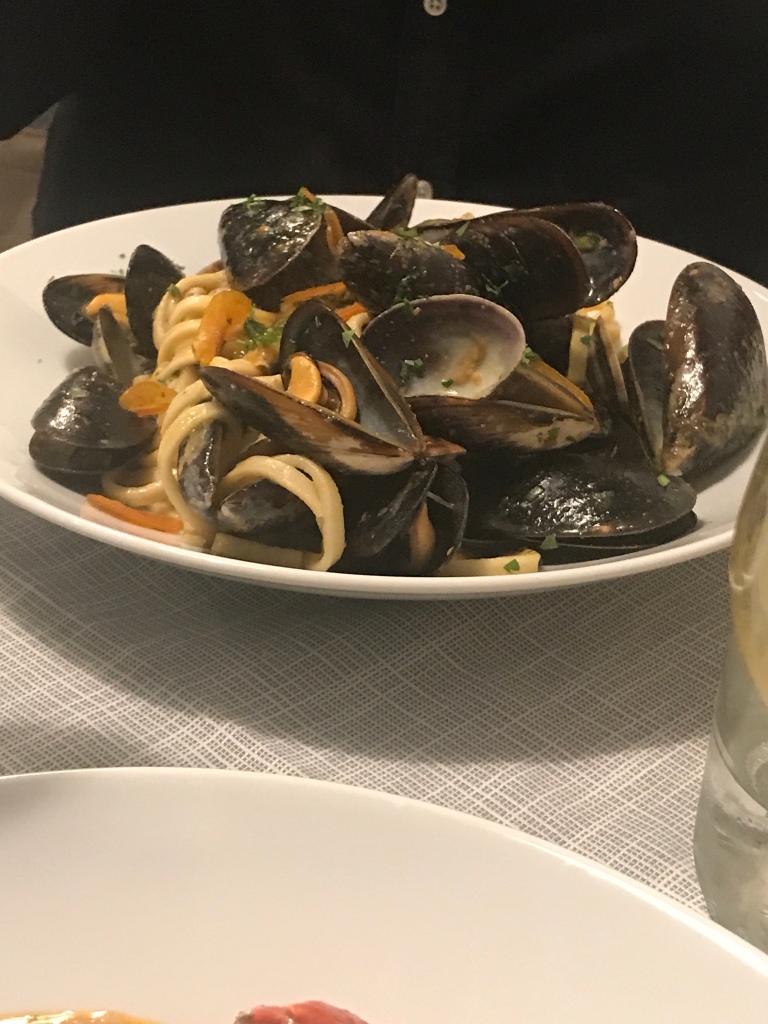 Apparently the mussels and pasta wasn’t as good as my lobster and his pasta was super thick. My lobster was outstanding though so anything would have seemed underwhelming in comparison.

Main: Fish and Potatoes (I cannot remember the fish, the entire menu was in Italian!) 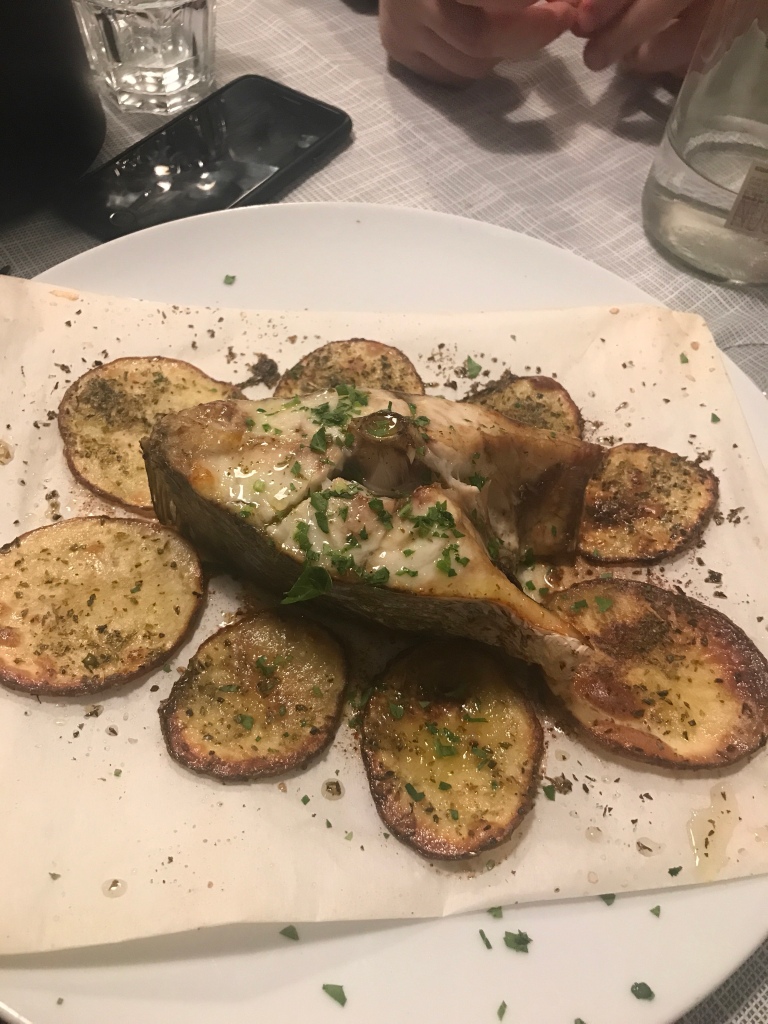 Lots of parsley on the dish but that wasn’t a problem. This meal was ok. Shy in comparison to the lobster but appreciated.

I had wanted to try a lot of the menu so this wasn’t a wasted dish. It needed a little salt and there was no salt/pepper on the table and I felt that it would have been an insult if I’d asked for them. I made Wojciech order a meal for 2-3 people so he was very embarrassed as everyone was judging him. I found it hilarious. 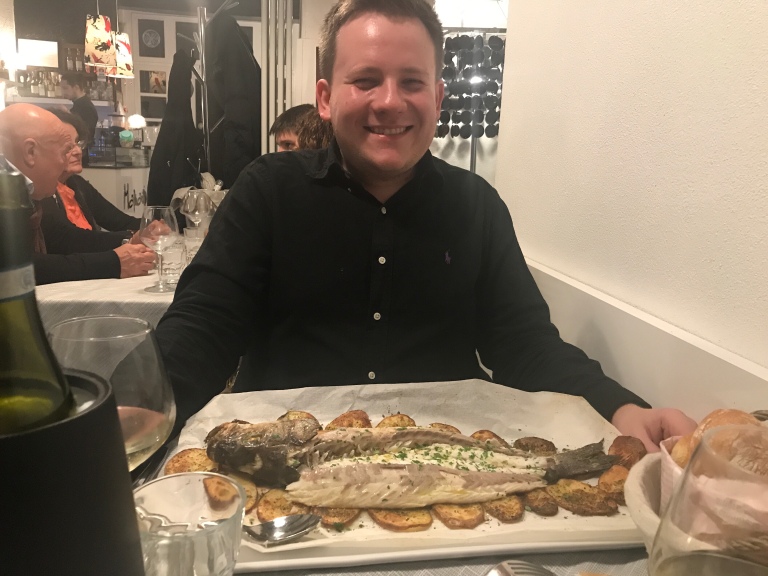 I ate all of my fish and half of his. No regrets. I also had delicious dessert that had been specially made for me. The dessert chef and I had the same name so she went the extra mile for me. Sweet! It was a chocolate orange type of mousse with a biscuit base. It was good.

Despite the fish needing a little bit of salt, I’d say this restaurant was a strong 8/10. I knew the food would be good and I wasn’t disappointed. I was so full that I thought I would explode. No regrets though. I went to Italy to eat and I certainly did.

All good things come to an end, apparently. I don’t really believe in that saying but it was time to go home. Before that, we decided to take the rental car and drive all the way to the other side of Como. As I mentioned in my last blog, this drive was beautiful but terrifying because we were literally on the edge of a cliff. 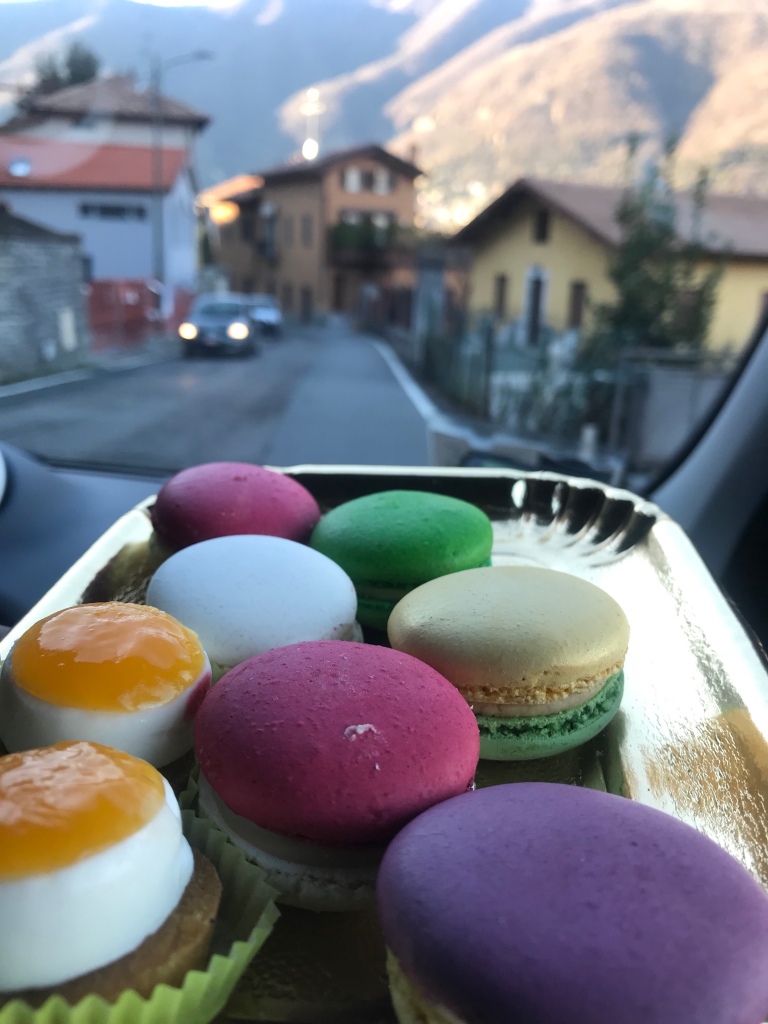 It wasn’t so bad, we stopped at a random patisserie near our flat and bought macaroons (and some other things) for the journey. 70% of them were good but there were a questionable 30%. We did get strange flavours like wasabi, truffle etc and ew, the truffle flavour tasted like poo. Never again. Regardless, it was a sweet addition to an awesome and scary journey. We stopped for obligatory photos too.

Look at the view people!

In good time, despite the stops, we ended up in this small town called Como.

Once I took in the beautiful scenery, I went on a journey, a beautiful journey, for food. Yes, more foooooood!

Restaurant: I cannot for the life of me remember the name! Sorry! It’s in Como!

You can’t go to Italy without trying spaghetti ragu! The restaurant we went to had a reasonably small menu but it may have been an afternoon menu as we were there between 3-5.

It was a nice ragu, fresh tasting and it had a stronger depth of flavour compared to anything I’ve ever had in the UK. After eating that I realised Dolmio sauce is a very inaccurate misrepresentation of ‘spaghetti bolognese.

Wojtek got a pizza. We had to try the classic Italian dishes on our last day there.

He said his pizza was good but a little salty. You can’t have everything I guess.

This was a fruity, rum punch type of cocktail and I like fruity cocktails especially when I can eat the fruit, so this worked for me. The only thing they needed to do was mix the sugar which sunk to the bottom of the cocktail ughhhhhh! I still appreciated it though, it was a pleasant surprise.

This was a good restaurant with a lot of potential but they were lazy. The place seemed super chill but lacking in certain areas. I enjoyed my spaghetti ragu and most of my cocktail and left happy!

If you want a good meal, phenomenal views and top gear-esque drives around a beautiful landscape then I would recommend Lake Como. To be honest, the flights were super cheap and a rental car varies on how much you want to spend but a word of advice: do not get a big car, particularly if you want to drive on the cliffs. If you could imagine cliffs do not have that much space and there are two cars going in either direction. Get a small car. For the sake of your sanity. This concludes my Lake Como Edition!