I’ll be advising you on day to day life in Cuba whilst on vacation. Where to stay (important), where/what to eat (very important) , bargain tour prices and of course the best bars for those pina colada cravings! Oh yes and Cuban cigars! 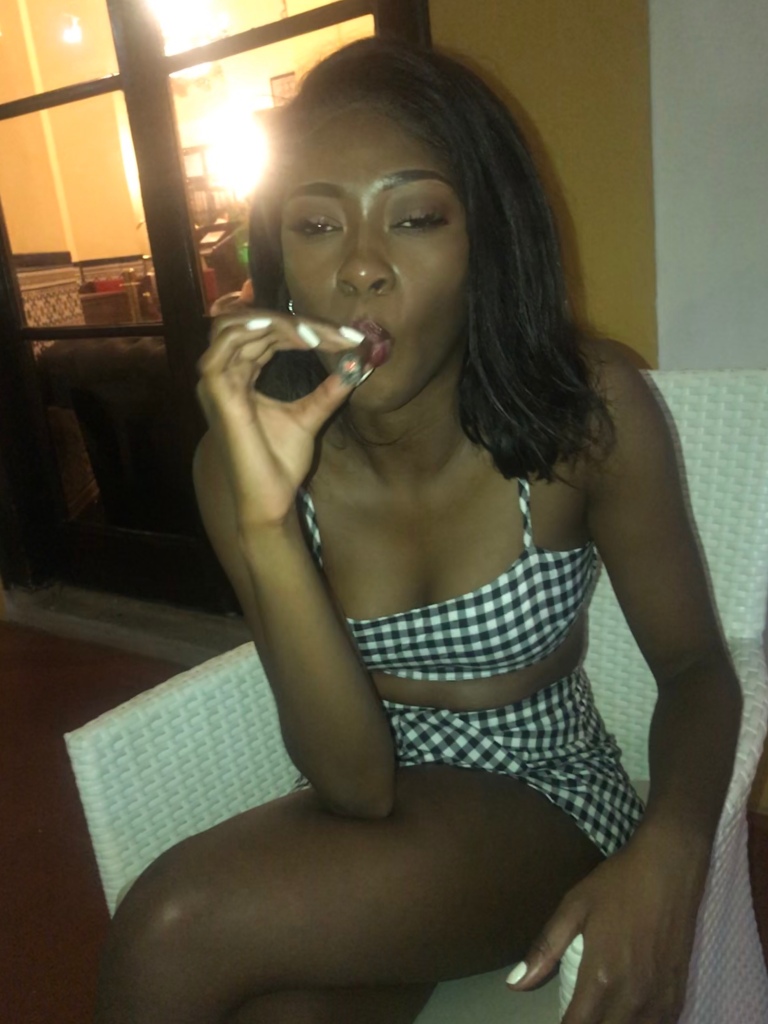 So I left you all at the part where I was screaming about money because many places that I went to in Havana did not accept card which left me having to go down to a hot, sweaty hotel money exchange every single day! Don’t be like me, exchange money before you travel or exchange everything you need all at once! Believe me, it saves a lot of time. 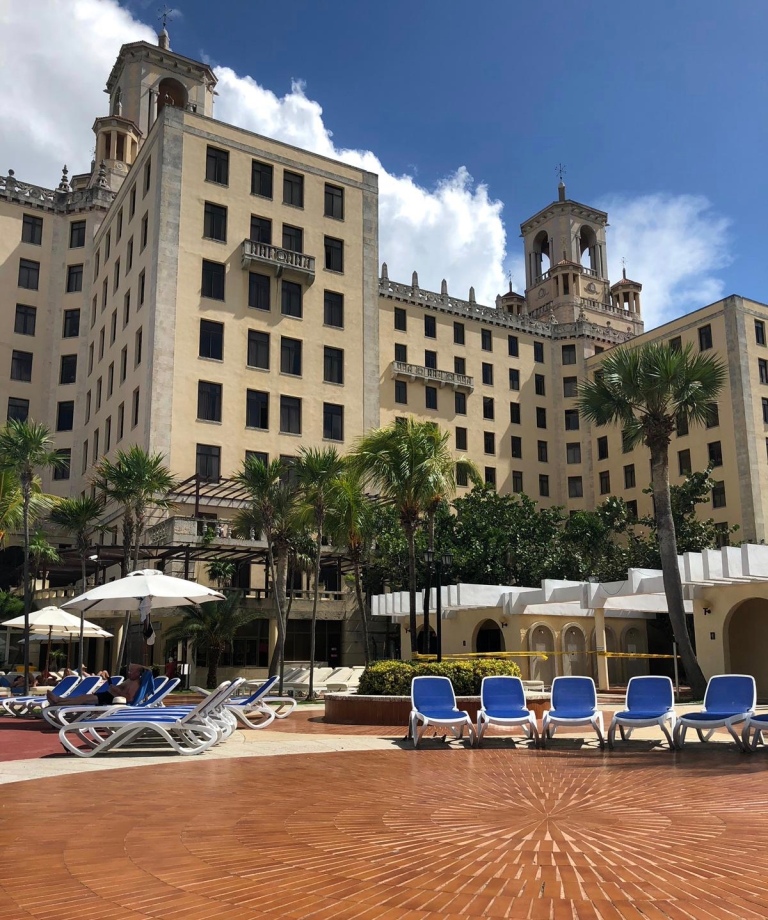 Cuban hotels, this was probably the trickiest and most expensive part of the trip. While looking for hotels, Airbnbs etc, I found the cheaper options terrifying. Literally, they looked like run down hotels/homes from the 1950’s.

On the opposite end of the spectrum were beautiful hotels/villas that looked modern and I guess ‘westernised’ but incredibly expensive. We were staying for nine days but the prices were starting from £1,000 + to stay somewhere comfortable. At one point I had this horrible feeling that I’d impulsively booked my flights with nowhere to stay (that I could afford).

This hotel was £754 to stay in for 9 days if I remember correctly (I know, expensive). That was with the bookings.com discount applied. Way too expensive considering that this was an impulsive holiday. Maybe it could have been cheaper if you booked in advance! PS: This hotel had WiFi but it would cut out quite frequently which was incredibly frustrating.

My advice: Look for a hotel/place to stay before booking the flights. If you do this already awesome but if not, you could find yourself with a bargain flight and an expensive hotel. Be careful because you want to be comfortable wherever you stay and I very nearly cancelled the trip because of this issue. Hotel Nacional is a comfortable hotel for westerners, it’s the best of a very old fashioned, historic hotel with beautiful views, good cocktails and cigars but it’s easy to fall into a trap of not leaving and spending excessive amounts of money on things like cigars, food, drinks that would be 100000000% cheaper and better outside the hotel.

Lord knows after three days of consistently eating food at my hotel I was ready to end this trip early, fly to Miami and have a good meal. Honestly, I was exhausted by the underwhelming food options. 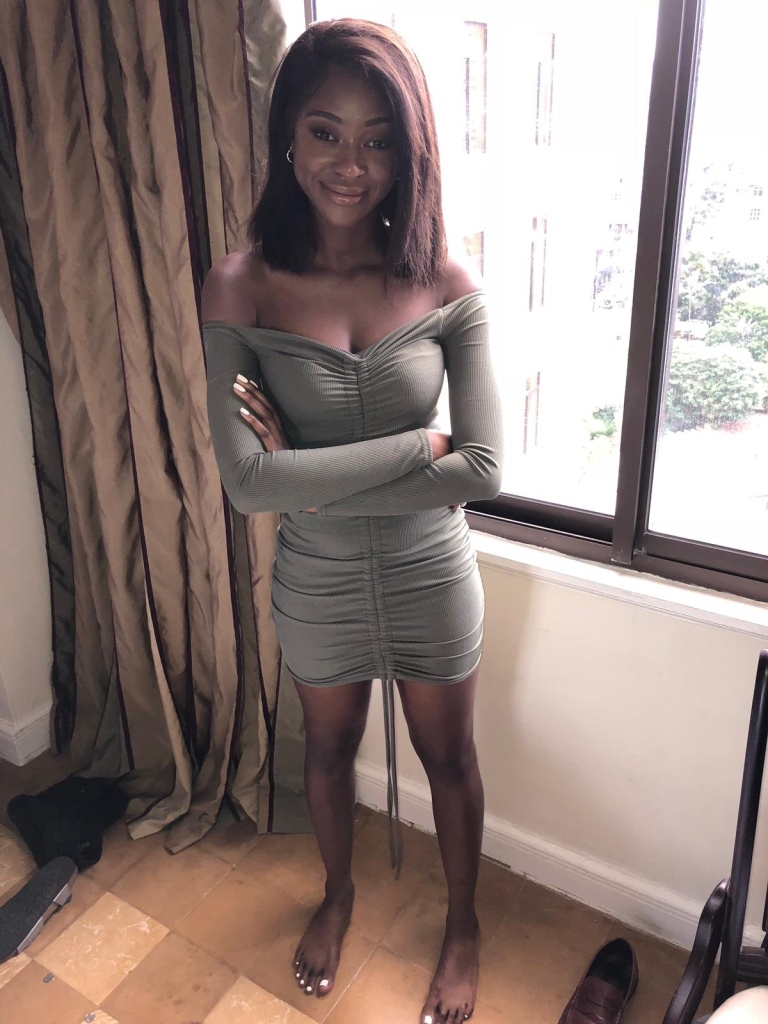 It’s clear that Cuba has amazing food with some of the freshest ingredients in the world! I just didn’t know where to go!

The options at my hotel were tolerable at best despite having three restaurant options!!

The pork and fish dishes were okay but I knew it would be better outside the hotel but it was difficult to know where to go. A burger and a beer were the best bet in my hotel! 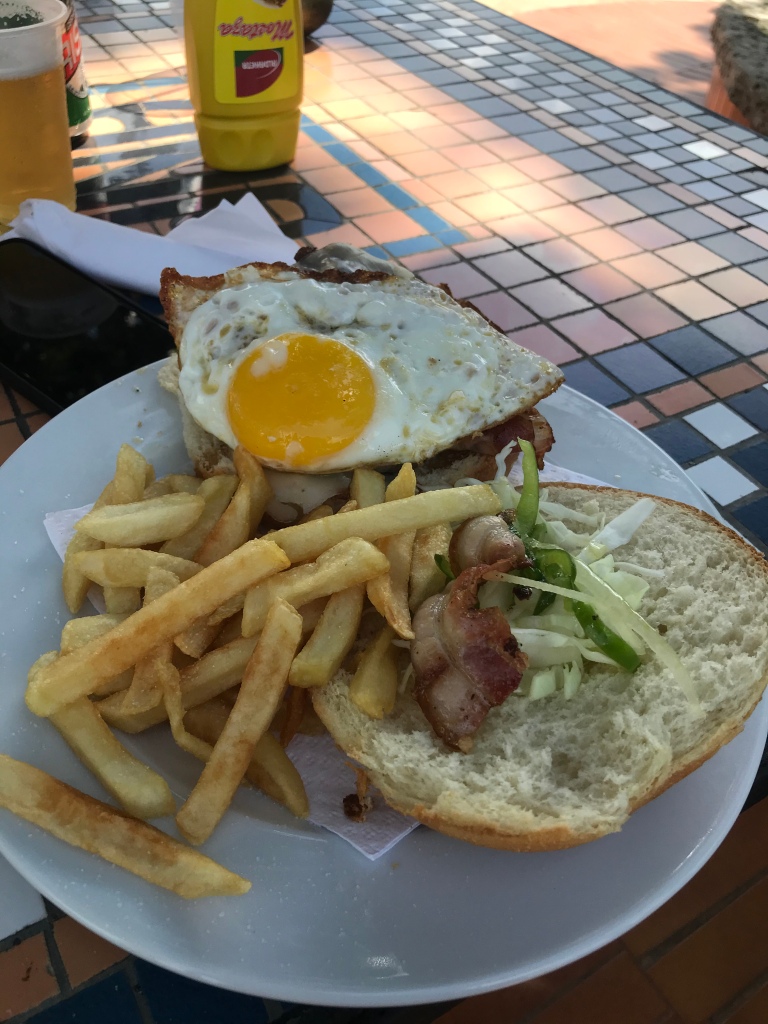 Local Restaurants around the hotel

There were loads of locals standing around the hotel who took us to restaurants in the area. At first I was terrified at the thought of following a stranger to an unfamiliar location and I would not advise doing this on holiday. In hindsight it was quite naïve to be this risky but in this instance it worked out well.

This bar was a two minute walk from the hotel and served decent food but they had an offer on alcohol where they served 5 shots of rum for 12 pésos which was CHEAPPPP.

Also they had live music and a wonderful duo that performed for us! I bought their CD!

For food, this place isn’t so great but for a good vibe and decent rum, I’d recommend it.

The best place to eat in Havana:

The Obamas ate here and honestly, once I found this restaurant, I had no desire to venture elsewhere. This place was my saving grace and completely changed my outlook. I mean honestly, it was transcending. 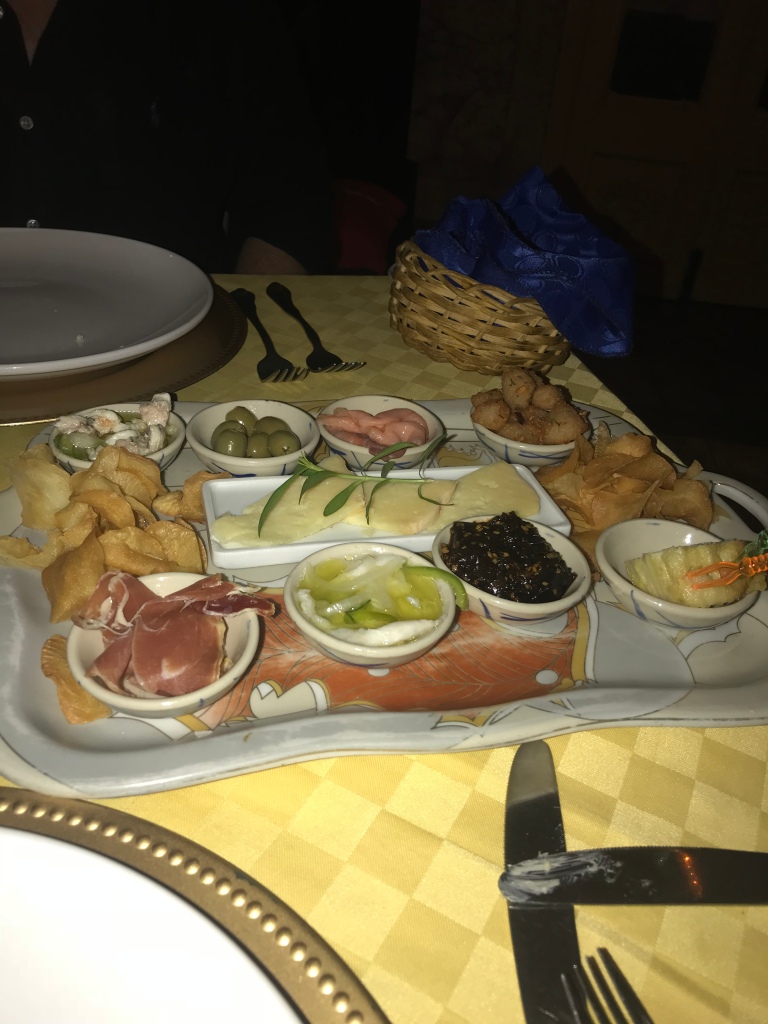 The ceviche was incredible, they had a wide selection of starters and mains! Everything from the service all the way to the drinks were just a different experience completely. I could hardly believe a place like this existed. I was so hungry and this place came with gargantuas portion sizes, lobster bigger than anything I had ever seen. I mean honestly, I had lobster, lamb, cured meats and so many delicious meals from this one restaurant and it was so cheap (comparatively)! Also, it looks so cool! 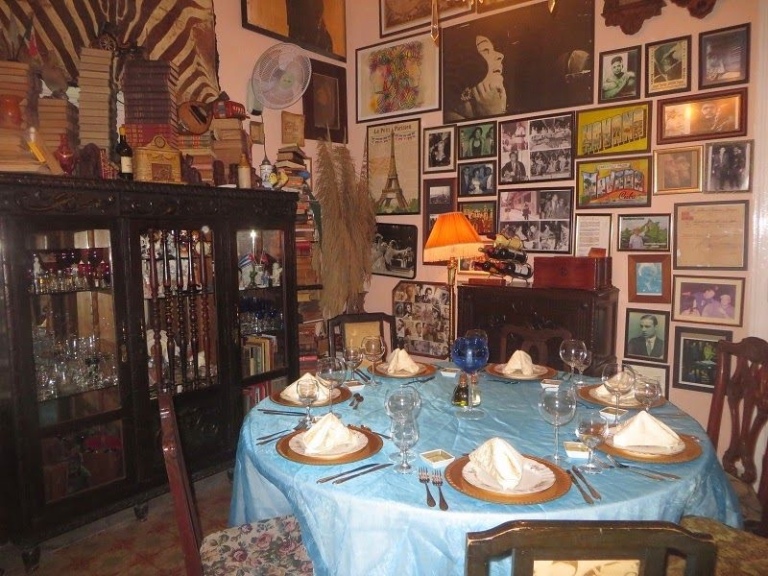 You cannot come to Cuba without trying this place out! On top of that, the food comes out super fast! It’s awesome !!! I was soooooooo happy!!! 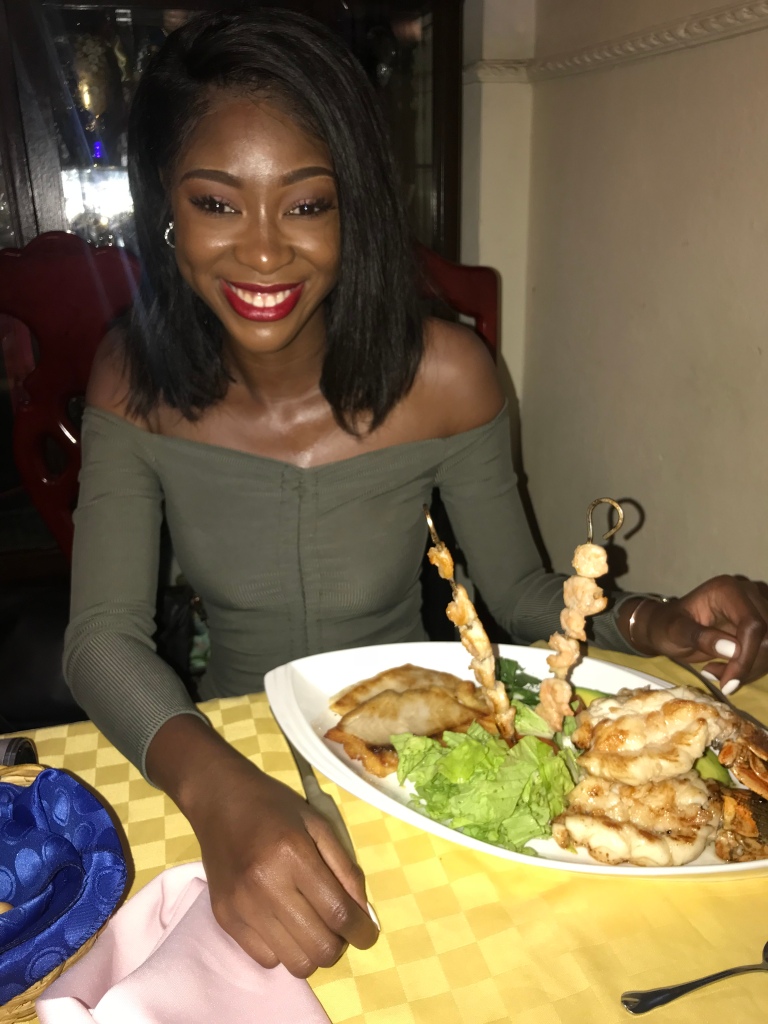 Located in central Havana, this bar was the obvious tourist hot spot. They had bouncers at the door and claimed to be the home of the first ever daiquiri as well as Earnest Hemingway’s favourite bar. It was probably the busiest bar we’d been to. They put so much alcohol in their cocktails . It was beautiful.

They had a statue of Earnest in his favourite spot, which again was tourist bait, I happily obliged.

Food: The food menu didn’t seem that extensive, they had sandwiches and as for drinks, there were the classic cocktails but the daiquiri was the obvious forerunner. 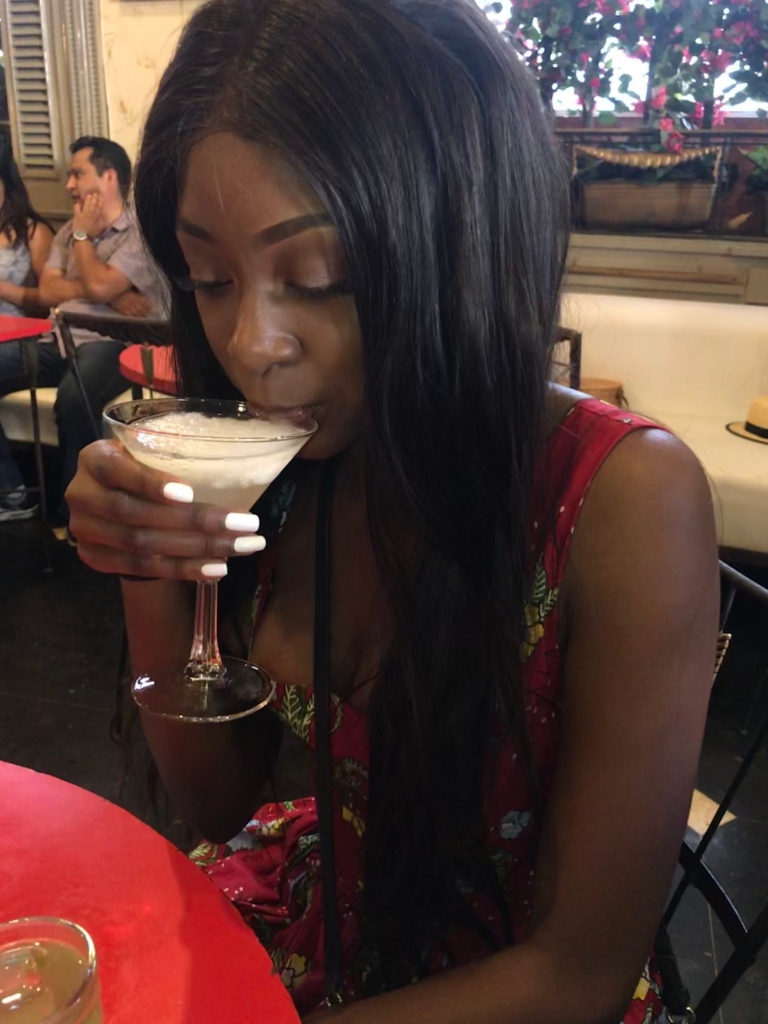 The daiquiri was alright. I’d been drinking daiquiris for so long but had never really tasted one like the ‘original’. I wasn’t taken aback but it’s cool to say I’ve tasted ‘ the original’ daiquiri. I preferred the pina colada, there was so much alcohol in it.

Hôtel Nacional had a desk on the ground floor where you could book day trips, either privately or in a group. Vinales Valley was the most popular and it did look beautiful.

I think it was a three hour journey on a coach for around £130 for two people, I can’t remember but it wasn’t expensive at all. We had a guide and as soon as we got to Vinales, there was a bar serving ice cold pina coladas (where you add the rum yourself) for 11 pesos. There was a beautiful backdrop too, that I stood in front of. 😌

The second stop of the Vinales tour was all about Cuban cigars, we were given the opportunity to see them being freshly made, understanding the process and smoking them!!!

Personally, I think it’s better and much cheaper to buy cigars from here. I’m no cigar expert but I do think the quality was better. I bought a pack of 10 cigars for 30 pesos as opposed to buying 1 cigar from my hotel for 15 pesos.

This cave was cool. It had bats in it so I guess it was a…batcave 😀

We were walking through this huge cave as a massive group and were waiting for a boat ride! There was a beautiful waterfall at the other side and also a bull called Thomas, which I sat on. 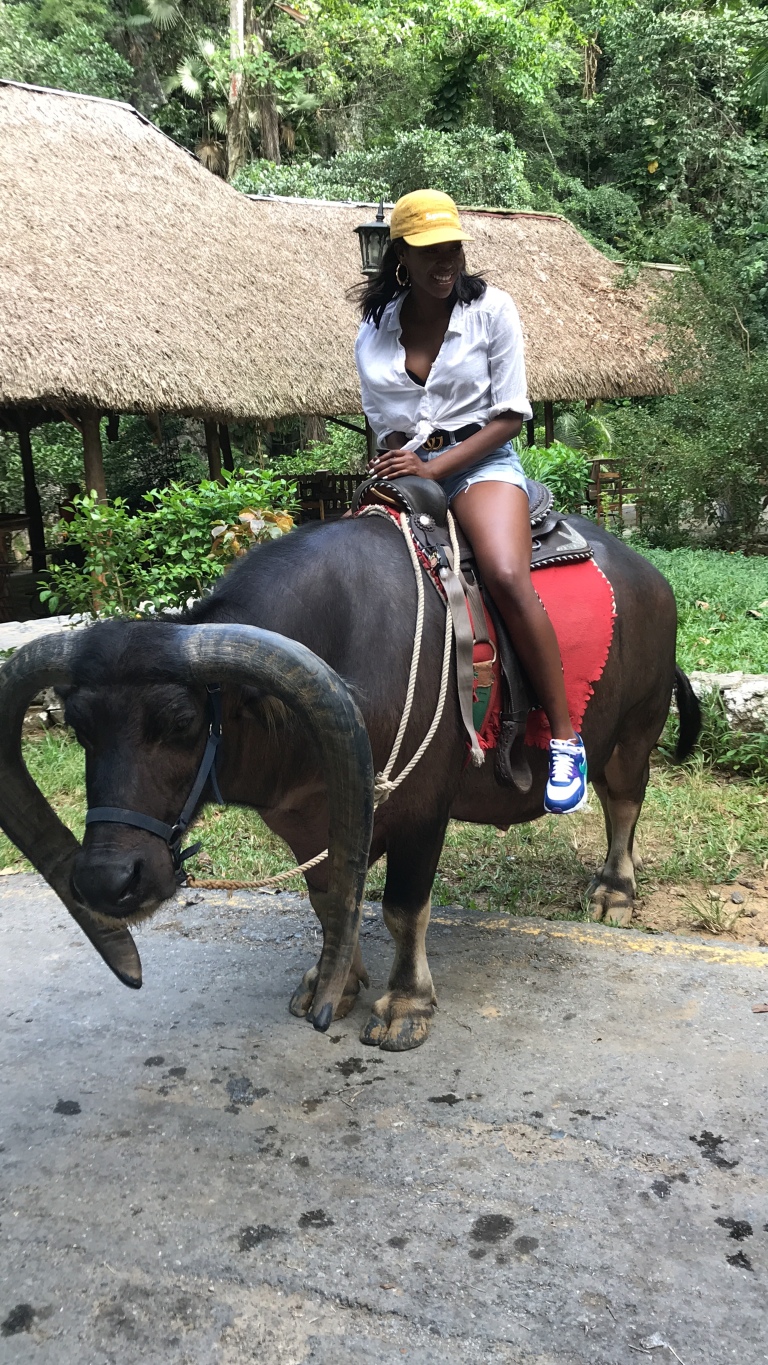 The tour included lunch which was the typical Cuban dish of pork, rice and beans which I didn’t mind at all. There were loads of mosquitoes here which was odd considering we hadn’t once encountered mosquitoes throughout the whole time in Havana. That didn’t dampen the mood at all and overall the tour was awesome. Definitely recommended.

This trip was ace, it took me awhile to warm to Cuba, but once I did I really enjoyed my time. Visit Cuba if you want to go back to basics, enjoy simplicity, good alcohol and cheap, delicious food. It’s totally worth it.